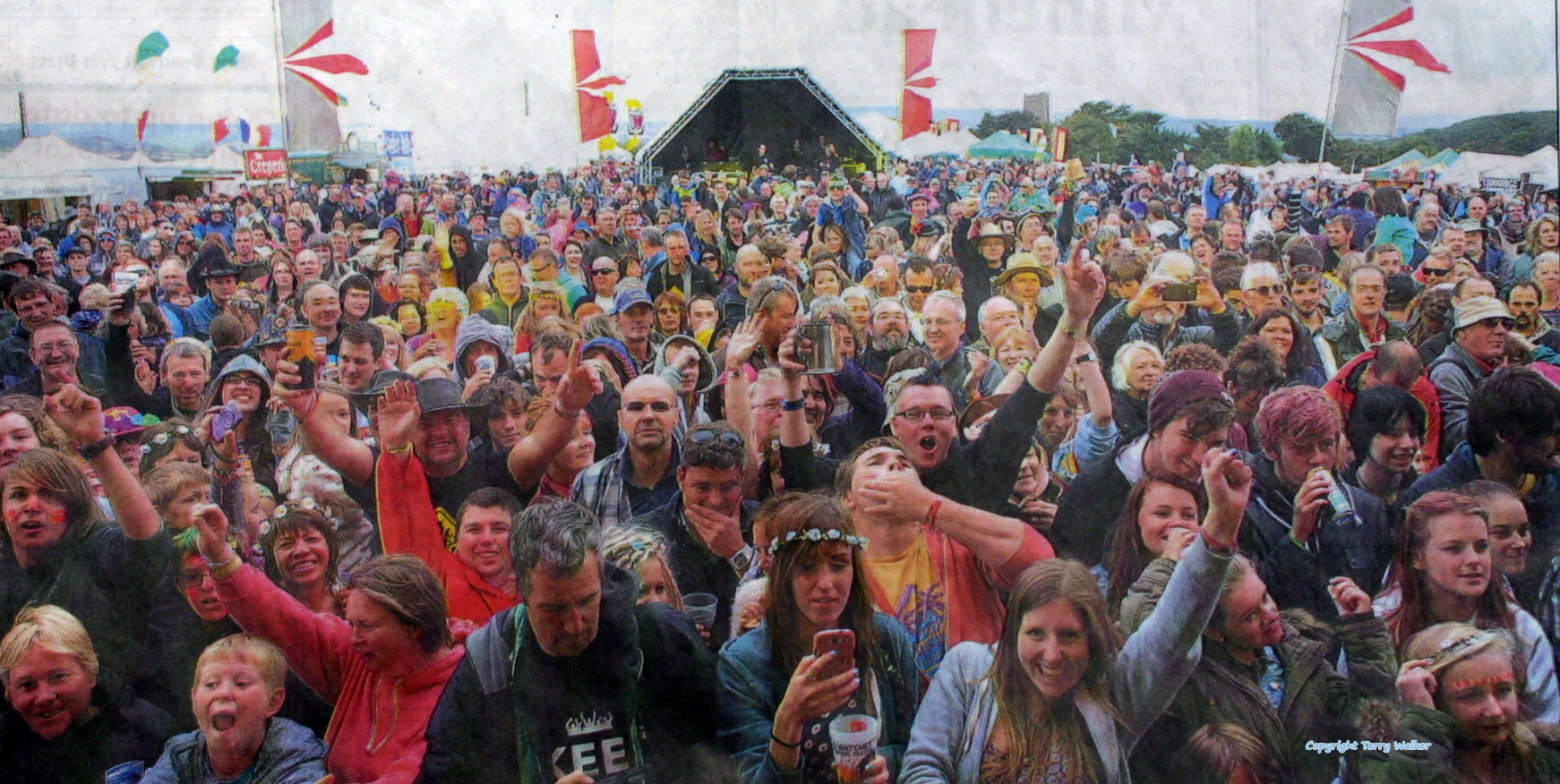 It all starts the year before………

In January we publish the Welcome to Watchet leaflet. The biggest part of the leaflet is the Calendar, the diary of events, the Whats on in Watchet! We spend the end of the winter collating all the local information about dates and whats happening and when. The leaflet then goes off for production and at the end of February a lovely glossy leaflet arrives for distribution. This is handed out all over West Somerset, taken to leaflet events, delivered to businesses and Visitor Centres countywide.

In February 2020 I received 15,000 leaflets for distribution. We had no idea what was to follow very quickly after that delivery.

Sorry we have to cancel Watchet Summer Time!

Sorry the Street Fairs will have to be cancelled!

Sorry we have to cancel Watchet Carnival!

Sorry we have to cancel Watchet 40s Weekend!

Sorry we are cancelling the Market until further notice!

Due to Covid-19 Watchet has had to cancel all of its amazing events and activities over the past 6 months. 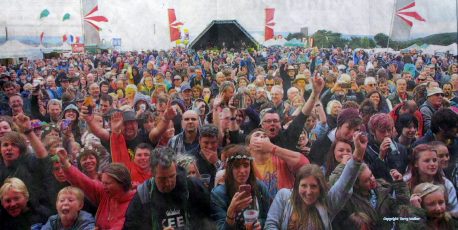 Known locally as ‘Party Central’, Watchet has reverted to a quiet harbour town. The tourists have visited and most have enjoyed the peacefulness that this town has to offer, the safety of a town that has fortunately missed much of the horrors of the pandemic. But for those of us who are used to a town full of action and fun, for those of us who love the normal weekends of activity and mayhem it feels like we are a town in waiting, a town waiting to emerge from the chrysalis of Covid 19. Watch out 2021 the residents and regular visitors of Watchet are itching to take central stage once more. Watchet the coiled spring of West Somerset feels ready to be released, ready to emerge once more into the amazing, lively, fun filled place it can be!

There are rumors of new things to be added to an already full calendar.  Of Fringe Festivals, of Reenactment weekends, of Drama and YES things will need to be different, but with so much time to forward plan we are all hoping that events organisers can start to make arrangements, can start to make announcements. The dates of the Watchet Festival have been announced this week and we wait for all the other groups to start adding their voice.

If anyone has anything to add to the 2021 calendar please contact me I’m itching to get started. Here’s to a bigger and better line up, more events more fun and far lest Covid -19. 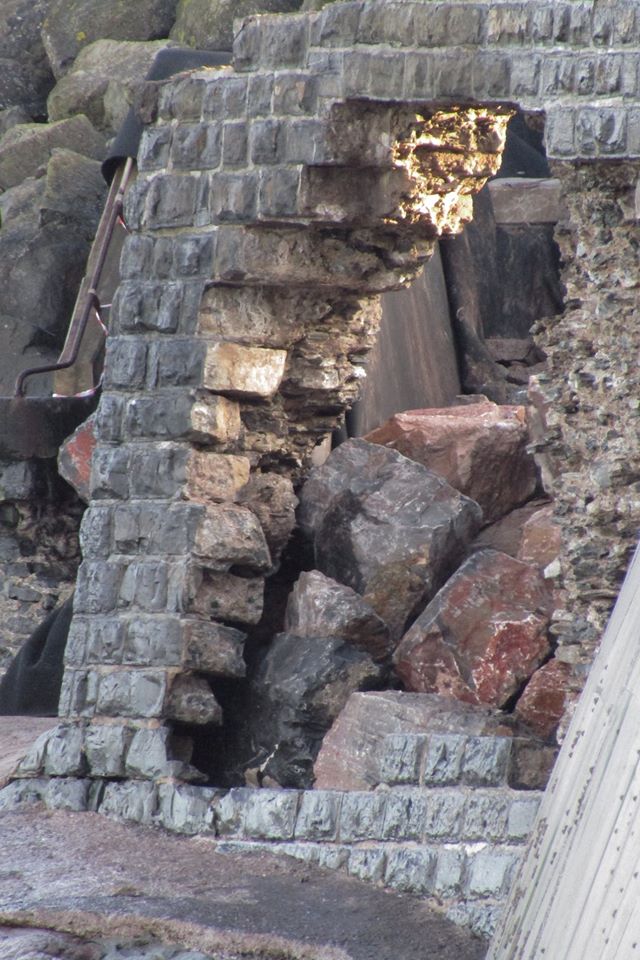 ARE YOU READY FOR THE INVASION?

The clocks go back at the weekend to the 1940s.

The bunting has been sewn, plans have been made, props have been built, dresses have been bought, menus selected and panic has taken over!

The 13th, 14th and 15th September will see Watchet invaded by large groups of re-enactors. As part of the West Somerset Railway ’40s Weekend, Watchet once again goes all out to re-create a 1940s town. Shops and businesses will have bomb taped windows, shop windows will be dressed, cafes and pubs will serve 40s fare.

The air raid sirens will sound and the trains will carry military hardware. 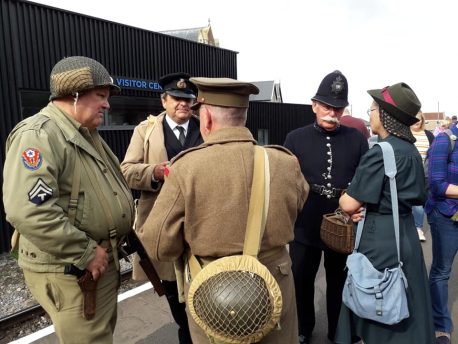 Friday sees the invasion of 140 evacuees! They will arrive by train and be taken to the Methodist hall where they will be allocated their families. Receive a lunch of spam sandwiches and cake and their allotted sweet ration.

In the Boat Museum, music from Betty Bluebird will be part of the evening celebration.

The arrival of the re-enactors from all over the country  will see Watchet’s population explode! Saturday has a full program of entertainment on the Esplanade, with Brass bands, community choir, stalls, 40s singing groups and individuals. Military vehicles and personnel moving around the town. Tea shops filled with cake and pubs with liver and onions!!! 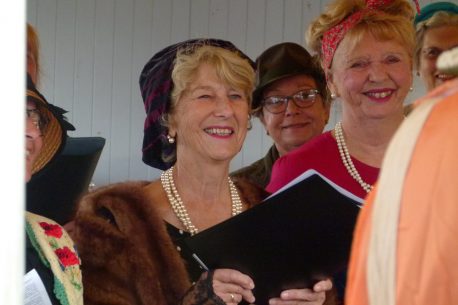 Uniformed personnel will attend a church service on Sunday morning at the war memorial this will start the day rightly remembering those who gave their lives for our freedom. Then the music will begin once again on the esplanade, time for dancing and having fun. Drinking tea, eating cake and enjoying the afternoon sun (which has been booked!)until we can do no more.

By 5 o’clock we’ll all be full of cake, feet will ache, heads will be pounding and we’ll ll be totally exhausted!! Don’t forget……………….

ONLY A YEAR TO PREPARE FOR THE NEXT ONE!!